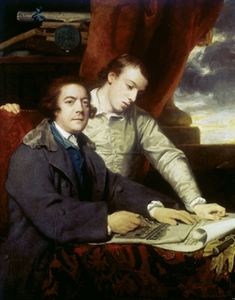 Who was James Paine?

James Paine was an English architect.

Essentially a Palladian, early in his career he was Clerk of Works at Nostell Priory, and worked on many other projects in the area including Heath House in the village of Heath in between Nostell Priory and Wakefield.

From the 1750s, he had his own practice, and designed many villas, usually consisting of a central building, often with a fine staircase, and two symmetrical wings. The most important house which he was involved with was Kedleston Hall, Derbyshire where he succeeded Matthew Brettingham from 1759 to 1760 and suggested the colonnaded hall, but he was himself displaced by Robert Adam, who altered his designs.

At around the same time he designed the very grand stables at Chatsworth House in the same county. He was a favourite architect of the powerful Catholic families of the time. In the 1760s he was commissioned to rebuild Worksop Manor for the Duke of Norfolk as well as the new Thorndon Hall in Essex for Lord Petre and his house on Park Lane, London. From 1770 to 1776, he built New Wardour Castle in Wiltshire.

Paine held various posts, some sinecures, in the Office of Works culminating in appointment as one of the two Architects of the Works in 1780 but lost the post in a reorganisation in 1782. He was appointed High Sheriff of Surrey for 1783.

Discuss this James Paine biography with the community: