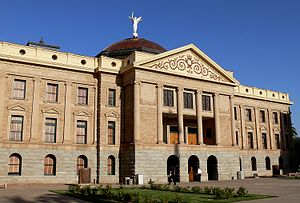 Who was James Riely Gordon?

James Riely Gordon was an architect who practiced in San Antonio until 1902 and then in New York City, where he established a national reputation. J. Riely Gordon is best known for his landmark county courthouses, in particular those in Texas. Working during the state's "Golden Age" of courthouse construction, Gordon saw 18 of his designs erected from 1885 to 1901; today 12 remain.

Gordon was born in Winchester, Virginia, to George Muir and Sarah Virginia Gordon. When he was 11 his family moved to San Antonio. At 16 he began working in the engineering office of the International and Great Northern Railroad.

In 1882, Gordon apprenticed to W.K. Dodson of Waco. Soon after Gordon went to work for the Office of the Supervising Architect of the Treasury, the agency responsible for the design of federal court buildings, customs houses, post offices, etc. In 1887 he returned to San Antonio to supervise construction of that city's U.S. Post Office and Courthouse. Gordon was essentially self-educated in his art, learning on his jobs, but never attending a school of architecture.

Discuss this James Riely Gordon biography with the community: