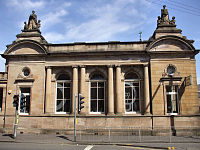 Who was James Robert Rhind?

James Robert Rhind, architect, was born in Inverness, Scotland in 1854 and trained as an architect in his father's local practice.

He was successful in the architectural competition for new libraries to be constructed in Glasgow following Andrew Carnegie’s gift of £100,000 to the city in 1901. His designs were selected for 7 libraries, allowing him to demonstrate his individual interpretation of Edwardian Baroque architecture.

Rhind’s libraries were all built with locally quarried sandstone, which blended in with the existing tenement neighbourhoods. His landmark buildings were greatly enhanced by his liberal use of columns, domes and sculpted features. Many of the façades were decorated with stone and bronze statues by the noted Glasgow sculptor, William Kellock Brown.

Discuss this James Robert Rhind biography with the community: