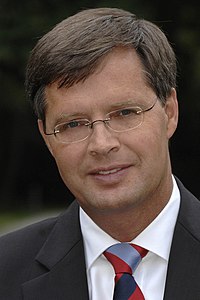 Who is Jan Peter Balkenende?

Jan Pieter "Jan Peter" Balkenende is a Dutch politician of the Christian Democratic Appeal. He served as Prime Minister of the Netherlands from 22 July 2002 until 14 October 2010.

He previously served as a Member of the House of Representatives from 19 May 1998 until 22 July 2002. After then CDA Party leader and Parliamentary leader in the House of Representatives Jaap de Hoop Scheffer stepped down after an internal power struggle, between him and then CDA Party Chair Marnix van Rij. Balkenende succeed him in both positions, and became the CDA Lijsttrekker for the Dutch general election of 2002. The CDA became the surprising winner of the election, gaining 14 seats and becoming the largest party in the House of Representatives. This success was in part owed to Balkenende and to his neutral attitude in the debate with LPF leader Pim Fortuyn, for not having participated in the supposed 'demonization' by the political Left. Fortuyn was assassinated during the national election campaign on 6 May 2002.

Discuss this Jan Peter Balkenende biography with the community: