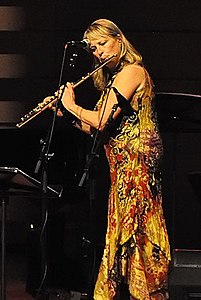 Who is Jane Bunnett?

In 2004, she was made an Officer of the Order of Canada. In 2006, she was awarded an honorary Doctorate by Queen's University at Kingston, Ontario, Canada.

In addition to her primary instruments, Bunnett also plays the trompeta china, a Cuban wind instrument of Chinese origin.

Discuss this Jane Bunnett biography with the community: