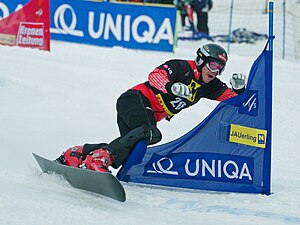 Jasey-Jay Anderson is a Canadian snowboarder and Olympic gold medalist, who competed in the 1998, 2002, 2006, 2010, and 2014 Winter Olympics. Anderson currently resides in Mont-Tremblant outside of Montreal.

Anderson is Canada's most decorated snowboarder having achieved a World Championship gold medal in all 3 slalom events over his career, and an Olympic gold medal in parallel giant slalom. In addition to being a 4 time world champion Anderson has achieved success across the board. Anderson won four consecutive overall FIS Snowboard World Cup titles from 2000–2004 and two world cup overall titles in snowboard cross in 2001–02 and 2005–06. These titles included 19 podiums in parallel giant slalom and 19 podiums in snowboard cross.

Anderson is also a four-time Olympic athlete, having represented Canada in the 1998 Nagano, 2002 Salt Lake, 2006 Turin, and 2010 Vancouver Winter Olympic games. Anderson's best result in the Olympics prior to Vancouver 2010 was a 5th place finish in snowboard cross in Turin. Anderson finished 20th in the parallel giant slalom event at the 2006 Turin games.

Discuss this Jasey-Jay Anderson biography with the community: