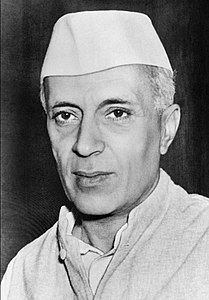 Who was Jawaharlal Nehru?

Jawaharlal Nehru was the first Prime Minister of India and a central figure in Indian politics for much of the 20th century. He emerged as the paramount leader of the Indian Independence Movement under the tutelage of Mahatma Gandhi and ruled India from its establishment as an independent nation in 1947 until his death in office in 1964. Nehru is considered to be the architect of the modern Indian nation-state; a sovereign, socialist, secular, and democratic republic. He was the father of Indira Gandhi and the maternal grandfather of Rajiv Gandhi, who were to later serve as the third and sixth Prime Ministers of India, respectively.

The son of a prominent lawyer and nationalist statesman, Nehru was a graduate of Trinity College, Cambridge and the Inner Temple, where he trained to be a barrister. Upon his return to India, he enrolled at the Allahabad High Court while taking an interest in national politics. Nehru's involvement in politics would gradually replace his legal practice. A committed nationalist since his teenage years, Nehru became a rising figure in Indian politics during the upheavals of the 1910s. He became the prominent leader of the left-wing factions of the Indian National Congress during the 1920s, and eventually of the entire Congress, with the tacit approval of his mentor, Gandhi. As Congress President, Nehru called for complete independence from Britain, and initiated a decisive shift towards the left in Indian politics. He was the principal author of the Indian Declaration of Independence.

Discuss this Jawaharlal Nehru biography with the community: