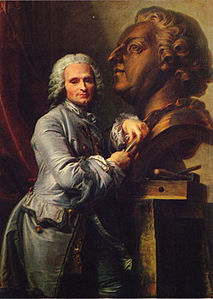 Who was Jean-Baptiste Lemoyne?

He received the prix de Rome awarded by the Académie royale de peinture et de sculpture, but remained in Paris to aid his blind father. he was a great figure in his day, around whose modest and kindly personality there waged opposing storms of denunciation and applause, as the Rococo style he embodied was rejected in favor of Neoclassicism; Charles Othon Frédéric Jean-Baptiste de Clarac asserted that he had delivered a mortal blow at sculpture. His freedom of composition was read as disregard of the classic tradition and of the essentials of dignified sculpture and he was accused of lack of firmness and of intellectual grasp of the larger principles of his art.

Lemoyne's more important works have for the most part been destroyed or have disappeared. The equestrian statue of Louis XV for the military school, and the composition of Pierre Mignard's daughter, Mme Feuquières, kneeling before her father's bust were destroyed in the French Revolution. The bas-relief panels only have been preserved.

Discuss this Jean-Baptiste Lemoyne biography with the community: