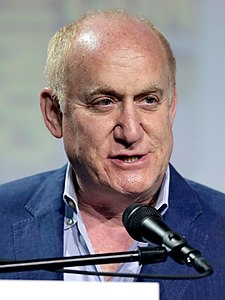 Who is Jeph Loeb?

Joseph "Jeph" Loeb III is an American film and television writer, producer and award-winning comic book writer. Loeb was a producer/writer on the TV series Smallville and Lost, writer for the films Commando and Teen Wolf and was a writer and Co-Executive Producer on the NBC TV show Heroes from its premiere in 2006 to November 2008.

In 2010, Loeb became Head of Television for Marvel in charge of drama, comedy and animation.

A four-time Eisner Award winner and five-time Wizard Fan Awards winner, Loeb's comic book work, which has appeared on the New York Times Best Seller list, includes work on many major characters, including Spider-Man, Batman, Superman, Hulk, Captain America, Cable, Iron Man, Daredevil, Supergirl, the Avengers, and Buffy the Vampire Slayer, much of which he has produced in collaboration with artist Tim Sale.

Discuss this Jeph Loeb biography with the community: