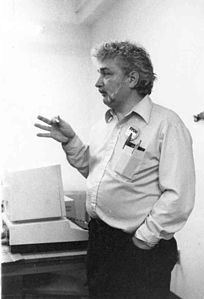 Who was Jim Butterfield?

Frank James "Jim" Butterfield was a Toronto-based author and computer programmer famous for his work with Commodore microcomputers.

A longtime contributor to periodicals such as The Transactor and TPUG, one of Butterfield's major works was Learning Machine Code Programming on the Commodore 64, one of the leading references on programming the 6502-derived 6510 microprocessor.

Butterfield was born in Ponoka, Alberta, and attended the University of Alberta and the University of British Columbia, but never graduated. In 1957 he moved to Whitehorse, Yukon, to work on the microwave system along the Alaska Highway.

In 1964, while working for CNCP Telecommunications, Butterfield first programmed a computer. A decade later he returned to computing by purchasing a KIM-1, hosted the first Toronto PET User's Group meeting in his home, and began writing on computer topics. After quitting his job with CNCP because he did not wish to relocate from Toronto, and with previous experience writing radio commercials, Butterfield in 1981 became a freelance writer, lecturer, and consultant.

In 1983, Butterfield appeared as the resident expert in the TVOntario educational television program, The Academy, which served as a companion series to Bits and Bytes.

Discuss this Jim Butterfield biography with the community: