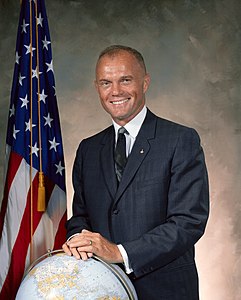 Who is John Glenn?

John Herschel Glenn, Jr. is a retired United States Marine Corps pilot, astronaut, and United States senator. He was the first American to orbit the Earth and the fifth person in space, after cosmonauts Yuri Gagarin and Gherman Titov and fellow Mercury Seven astrononauts Alan Shepard and Gus Grissom. Glenn was a combat aviator in the Marine Corps and one of the Mercury Seven, who were the elite U.S. military test pilots selected by the National Aeronautics and Space Administration to operate the experimental Mercury spacecraft and become the first American astronauts. He flew the Friendship 7 mission on February 20, 1962. In 1965, Glenn retired from the military and resigned from NASA so he could be eligible to stand for election to public office. As a member of the Democratic Party he was elected to represent Ohio in the U.S. Senate from 1974 to 1999.

Glenn received a Congressional Space Medal of Honor in 1978, and the Presidential Medal of Freedom in 2012. He was inducted into the Astronaut Hall of Fame in 1990. On October 29, 1998, he became the oldest person to fly in space, and the only one to fly in both the Mercury and Space Shuttle programs, when at age 77, he flew on Discovery. Glenn and Scott Carpenter are the last living members of the Mercury Seven.

Discuss this John Glenn biography with the community: