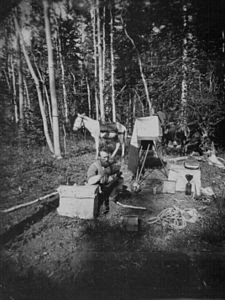 Who was John Karl Hillers?

Hillers came to the United States in 1852. He was a policeman and then a soldier in the American Civil War, first with the New York Naval Brigade, then in the army, he re-enlisted after the war and served with the Western garrisons until 1870. He worked as a teamster in Salt Lake City, when he met John Wesley Powell.

Originally hired as a boatman for the second Powell expedition down the Colorado River in 1871, Hillers began to replace Walter Clement Powell, John W. Powell's cousin and assistant to the expedition's photographers, first to E.O. Beaman and then to James Fennemore.

Hillers was Powell's chief expedition photographer on the trip down the Grand Canyon the next year.

He went on to spend twenty years exploring and photographing the American West, and is known particularly for his portraits of Native Americans.

He was the first staff photographer of Powell's Bureau of Ethnology and after returning to Powell's US Geological Survey in 1881 continued Bureau of American Ethnology work until he resigned in 1900.

Discuss this John Karl Hillers biography with the community: