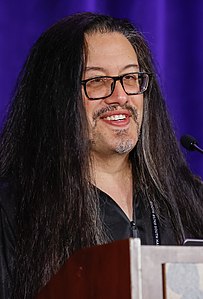 Who is John Romero?

Alfonso John Romero is a director, designer, programmer, and developer in the video game industry. He is best known as the creator of Daikatana as well as a co-founder of id Software and was a designer for many of their games, including Wolfenstein 3D, Dangerous Dave, Doom and Quake. His game designs and development tools, along with new programming techniques created and implemented by id Software's lead programmer John D. Carmack, led to a mass popularization of the first person shooter, or FPS, in the 1990s. He is credited with coining the FPS multiplayer term "deathmatch".

Discuss this John Romero biography with the community: