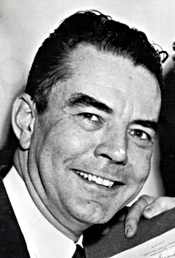 Who was John W. Byrnes?

John William Byrnes was a U.S. Representative from Wisconsin.

Born in Green Bay, Wisconsin, Byrnes contracted polio as a small child. He received his bachelor's degree from the University of Wisconsin in Madison in 1936, and then attended its law school. After graduation, Byrnes practiced law in Green Bay, and served as deputy commissioner of the state's department of banking from 1938 to 1941. He served in the state senate from 1941-1945, representing the 2nd District.

Byrnes was elected in 1944 as a Republican to the 79th Congress from Wisconsin's 8th district. He defeated one-term incumbent LaVern Dilweg, a notable former professional football player with the Green Bay Packers. Byrnes was reelected to the thirteen succeeding Congresses, and served 28 years from January 1945 to January 1973, making him the 8th district's longest serving representative. He did not seek a fifteenth term in 1972 to the 93rd Congress.

After Congress, stayed in Washington to practice law and continued to reside in Arlington, Virginia.

Discuss this John W. Byrnes biography with the community: