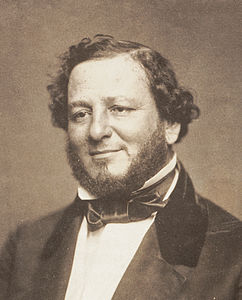 Who was Judah P. Benjamin?

Judah Philip Benjamin, QC was an American politician, lawyer, and slaveholder who served in cabinet level positions in the Confederate States of America, including Secretary of War, Attorney General and Secretary of State. Born a British subject in the West Indies in what is now an unincorporated territory of the United States, he moved to the United States with his parents and became a citizen. He later became a citizen of the Confederate States of America. After the collapse of the Confederacy, Benjamin moved to England, where he established a second legal career. In 1883 he retired and moved permanently to Paris, where his wife and daughter had lived for years. He died the following year.

During his career in U.S. politics, Benjamin was a member of the Louisiana House of Representatives; in 1852, he was elected by the state legislature to the US Senate from Louisiana, the second Jewish senator in U.S. history. Following the formation of the Confederate States of America in 1861, he was appointed by President Jefferson Davis to three different Cabinet posts in his administration. Benjamin was the first Jewish appointee to a Cabinet position in a North American government, and the first Jewish American to be seriously considered for nomination to the U.S. Supreme Court. Following his relocation to the United Kingdom, he became a distinguished barrister and in 1872 was appointed a Queen's Counsel.

Discuss this Judah P. Benjamin biography with the community: