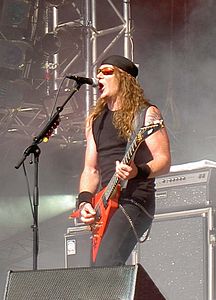 Who is Kai Hansen?

Kai Michael Hansen is a heavy metal guitarist and vocalist.

Hansen is the founder, lead guitarist, and vocalist of power metal band Gamma Ray. He is also the co-founder and former member of German metal band Helloween. He is a prominent figure in power metal and has sold millions of albums worldwide. He is regarded as "the godfather of power metal", having founded three seminal bands in the genre. In 2011, he joined the band Unisonic featuring former Helloween vocalist Michael Kiske.

Discuss this Kai Hansen biography with the community: