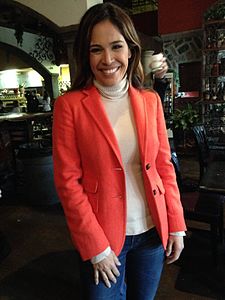 Who is Karla Martínez?

Karla Martínez is a Mexican TV Show Host. She is best known for hosting the show Control from 2000 to 2006 where she took over the show after Lesley Ann Machado's departure. She is currently a co-host on the popular morning show Despierta América on the Univision Network.

Martínez was born in Chihuahua, Chihuahua. and graduated from the University of Texas at El Paso with a degree in electronic media. She began her career at KINT-TV, Univision's El Paso, Texas affiliate, in 1995.

In 2002, People en Español named Martínez one of its 25 Most Beautiful People.

Born
May 11, 1976
Chihuahua
Also known as
Profession
Education
Lived in

Discuss this Karla Martínez biography with the community: