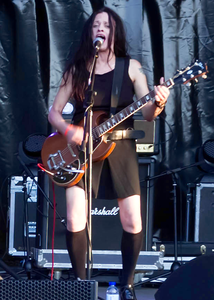 Who is Kat Bjelland?

Katherine "Kat" Lynne Bjelland is an American singer-songwriter, musician and guitarist. Bjelland rose to prominence as the lead singer, guitarist, and songwriter of the punk rock band Babes in Toyland, which formed in Minneapolis, Minnesota in 1987. Bjelland, who was raised in Woodburn, Oregon, had also been involved in musical projects she formed with friend and bandmate Courtney Love in Portland and San Francisco in the early 1980s.

Babes in Toyland officially disbanded in 2001 after releasing three studio albums, and Bjelland worked on several projects before forming Katastrophy Wife, of which she is currently the lead vocalist and guitarist.

Discuss this Kat Bjelland biography with the community: