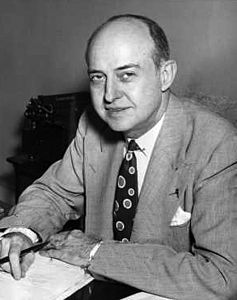 Who was Keen Johnson?

Keen Johnson was the 45th Governor of Kentucky, serving from 1939 to 1943. He remains the only journalist to have served in that capacity. After serving in World War I, Johnson purchased and edited the Elizabethtown Mirror. After reviving the struggling paper, he sold it to a competitor and used the profits to obtain his journalism degree from the University of Kentucky in 1922. After graduation, he became editor of the Anderson News, and in 1925, he accepted an offer to co-publish and edit the Richmond Daily-Register.

In 1935, Johnson was chosen as the Democratic nominee for lieutenant governor. He was elected and served under Governor A. B. "Happy" Chandler from 1935 to 1939. He had already secured the Democratic gubernatorial nomination in 1939 when Chandler resigned and elevated Johnson to governor so that Johnson could appoint Chandler to the U.S. Senate seat vacated by the death of M. M. Logan. He went on to win a full gubernatorial term in the general election, defeating Republican King Swope. Johnson's desire to expand the state's social services was hampered by the financial strain imposed on the state by the outbreak of World War II. Nevertheless, he ran a fiscally conservative administration and took the state from being $7 million in debt to having a surplus of $10 million by the end of his term.

Discuss this Keen Johnson biography with the community: