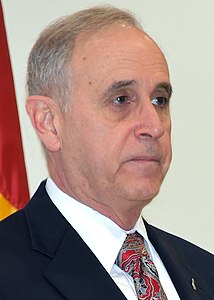 Who is Keith Dayton?

Lieutenant General Keith W. Dayton, United States Army, is the director of the George C. Marshall European Center for Security Studies in Garmisch-Partenkirchen, Germany. Dayton completed his term as the U.S. Security Coordinator for Israel-Palestinian Authority in Tel Aviv, Israel in October 2010. He has also served as the Director of the Iraq Survey Group, as a senior member of the Joint Staff, and as U.S. Defense Attache in the U.S. Embassy in Moscow, Russia.

Discuss this Keith Dayton biography with the community: