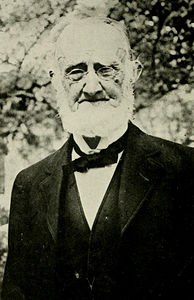 Who was Kemp P. Battle?

Battle graduated from the University in 1849 as the valedictorian of his class. During the next five years he worked at the university, as tutor of Latin and then as tutor of mathematics, while studying law under the tutelage of his father, William Horn Battle. He was admitted to the Bar in 1854 and began a practice in Raleigh. In 1857, he was named a director of the rechartered Bank of North Carolina and in 1861 was a delegate to the Secession Convention. During the Civil War he served as president of the Chatham Railroad which existed primarily to haul coal from the mines in Chatham County to Confederate armament factories.

In 1862, Battle was elected by the legislature to serve as a trustee of the University and held this position until 1868, when the entire board was thrown out by the Reconstruction General Assembly. He was elected Treasurer by the legislature in 1866 but removed from office in 1868 by the occupying U.S. military authorities because of his service to the Confederacy.

In 1874, Battle was reappointed a trustee to the University. He was named president of the University in 1876 and served ably until 1891, when he resigned to become Alumni Professor of History. He became a distinguished historian and compiled a significant body of scholarly work, the most prominent piece being his two-volume History of the University of North Carolina which is still today considered a significant study. In fact, the Dialectic and Philanthropic Societies, the oldest student group on UNC's campus, hosts a lecture every year on University Day named in his honor.

Discuss this Kemp P. Battle biography with the community: