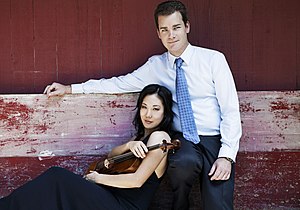 Who is Ken Cowan?

Biography Ken Cowan is one of North America’s finest concert organists. Praised for his dazzling artistry, impeccable technique and imaginative programming by audiences and critics alike, he maintains a rigorous performing schedule which takes him to major concert venues across America, Canada and Europe. Recent and upcoming feature performances include appearances at Grace Cathedral San Francisco, Philadelphia’s Verizon Hall, Spivey Hall, Walt Disney Concert Hall, and the Cathedral of Notre-Dame, Paris, France. In addition, Mr. Cowan has been a featured artist in recent years at the national conventions of the American Guild of Organists held in Los Angeles and Minneapolis, has performed at many regional conventions of the AGO, and has been featured at several conventions of the Organ Historical Society and the Royal Canadian College of Organists. Numerous critically acclaimed compact disc recordings are available by Mr. Cowan, many of them on the JAV label. His most recent release is The Art of the Symphonic Organist Vol 4, which was recorded on the Michael Quimby organ at First Baptist Church in Jackson Mississippi. In addition to his recordings for the JAV label, Mr. Cowan also joined organist Justin Bischof in the world premiere recording of American composer Aaron Miller’s Double Concerto for organ, recorded with the Zurich Symphony Orchestra on the Kleuker organ in the Tonhalle, Zurich, Switzerland (Ethereal Recordings). Many of Mr. Cowan’s recordings and live performances are regularly featured on the nationally distributed radio show PIPEDREAMS from American Public Media. A native of Thorold, Ontario, Canada, Mr. Cowan received the Master’s degree and Artist Diploma from the Yale Institute of Sacred Music, studying organ with Thomas Murray. Prior to attending Yale, he graduated with a Bachelor of Music degree from the Curtis Institute of Music in Philadelphia where he studied with John Weaver.Currently Mr. Cowan serves as Assistant Professor of Organ at Westminster Choir College in Princeton, NJ, where he is the only full-time organ teacher and maintains a full studio. Previous positions have included Associate Organist and Artist in Residence at Saint Bartholomew’s Church, New York City, Assistant Organist posts at St. James Episcopal Church, the Church of Saint Mary the Virgin in New York City, and Saint Clement’s Church in Philadelphia. He has also been on the roster of Associate Organists for the famous Wanamaker Grand Court organ in Philadelphia. Revised August 2008 Discography Ken Cowan plays Romantic MasterworksKen Cowan plays masterworks of the 19th century on the revolutionary symphonic organ created in Lincoln, Nebraska, by the Schoenstein Organ Company in 1997 for First Plymouth Congregational Church.Works by Liszt (Ken Cowan's own transcription of the Mephisto Waltz), Karg-Elert, Reger, and Reubke.RavenArt of the Symphonic Organist Ken Cowan plays the 1921 Skinner organ at the Parish Church of St. Luke, Evanston, Illinois.Includes works by Wagner, Saint-Saëns, Widor, Liszt, S.S. Wesley, and Karg-Elert.JAV Recordings 141 Ken Cowan Ernest SkinnerKen Cowan plays the 1930 Skinner at the Cathedral of Our Lady Queen of the Most Blessed Holy Rosary, Toledo, OhioJAV Recordings 131 Ken Cowan plays organ favorites:Works by Bach, Dupré, Roger-Ducasse, Manari, and Lemare performed on the restored 1930 Skinner organ at St. Peter’s Episcopal Church in Morristown, NJJAV Recordings 129 Great Organbuilders of America: A Retrospective-Volume 9 Ken Cowan plays the EM Skinner at Jefferson Avenue Presbyterian Church, Detroit MichiganJAV Recordings 118 The Austin Organ at St. Mary’s College Chapel, Moraga, California Works by Sowerby, Saint-Saëns, Lang, Whitlock, Mozart, Guilmant, Callahan, RegerAO101-CD Music from the Curtis Organ in Irvine Auditorium at the University of PennsylvaniaWorks by Wagner, Mendelssohn, Tchaikovsky, Vierne, Roger-Ducasse, Saint-Saëns, and LisztCD141602 *******All of...

Discuss this Ken Cowan biography with the community: