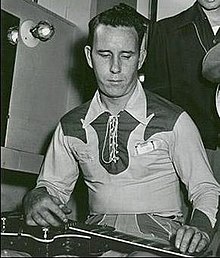 Kenneth Ray Carllile, better known as Thumbs Carllile, was an innovative American country music guitarist and songwriter known for his fingerstyle playing, sitting with his guitar in his lap while fretting, picking and strumming with his fingers and thumbs. He performed with Little Jimmy Dickens at the Grand Ole Opry in the early 1950s, and was a member of Roger Miller's band from 1964 to 1972.

Discuss this Kenneth Carllile biography with the community: