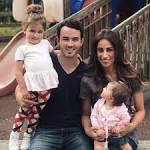 Who is Kevin Jonas?

Paul Kevin Jonas II, better known as Kevin Jonas and KJ2, is an American musician and actor. He is the oldest member of the Jonas Brothers, a pop rock band he created with his younger brothers Joe and Nick. In 2008, he appeared on People magazine's list of the Sexiest Men Alive. On December 19, 2009, he married Danielle Deleasa, whom he had met in the Bahamas in summer of 2007. As of August 2012, Jonas and his wife star in their own E! reality series, Married to Jonas.

Discuss this Kevin Jonas biography with the community: