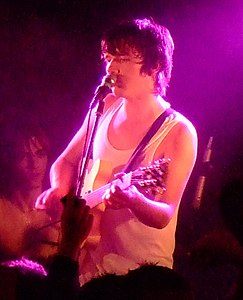 Who is Kieren Webster?

Kieren Clark Webster, is the bass guitarist and occasional lead vocalist for Scottish band The View. Along with frontman Kyle Falconer, he writes the majority of The View's material. In 2006, he was placed 6th in NME's Cool List. He and Falconer alternate roles on some songs such as "Skag Trendy", "Gran's for Tea", "One Off Pretender", "Realisation", "Fireworks and Flowers", and "Hole In The Bed", with Webster taking on guitar and lead vocals and Falconer replacing him as bass guitarist and backing vocalist. He and other band members are from the Dryburgh district of Dundee.

Discuss this Kieren Webster biography with the community: