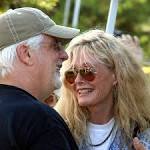 Who is Kim Carnes?

Kim Carnes is an American singer-songwriter. She is a two-time Grammy Award winner noted for her distinctive raspy vocal style, which has drawn comparisons to Rod Stewart. She had her first solo top-ten hit with a cover version of "More Love" in 1980 and later achieved international success with her album Mistaken Identity which reached #1 in the USA in 1981, and yielded the international hit "Bette Davis Eyes".

Discuss this Kim Carnes biography with the community: