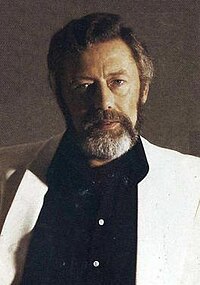 Who was Klaus Wunderlich?

Klaus Wunderlich was a German musician.

Wunderlich was born in Chemnitz and died in Engen from a heart attack.

Wunderlich played the Hammond organ during the first half of his career, and later switched to Wersi organs and Moog synthesizers with which he created his own unique electronic sound. He was open to different music styles and played classical, operetta, Broadway musical, as well as popular music. He sold more than 20 million records all over the world and received 13 golden albums as well as one golden cassette. Some of his work was put into the Soviet cartoon, Nu Pogodi!

Discuss this Klaus Wunderlich biography with the community: