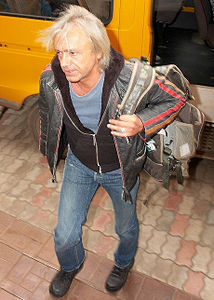 Konstantin Kinchev is a Russian rock singer, musician, frontman and the main songwriter for the Russian rock/hard rock band Alisa.

Born Konstantin Evgenievich Panfilov in Moscow, Soviet Union, he took his grandfather's surname for his stage name Kostya Kinchev. When Kinchev was a 15-year-old teenager, he heard heavy metal band Black Sabbath for the first time in his life. After that he decided to collect musical albums of hard rock bands of that time. In mid 1970s, before joining Alisa he played in some local Moscow-based bands. In 1984 Kinchev made a decision to leave Moscow and move to Leningrad, where he was offered to become Alisa's vocalist.

The band's lineup was finally completed in December 1984, when new vocalist Kostya Kinchev and guitarist Petr Samoylov joined. Their debut album Energia was released by state publishing monopoly Melodiya and sold more than a million copies.

In 1987, the newspaper Smena accused Alisa's leader Kinchev of Nazi propaganda and worshipping Hitler. Kinchev filed a suit for calumny and moral loss compensation. After the year-long court process the magazine published a refutation. Alisa's next album was titled Article 206 part 2, a chapter of the Soviet Union Procedural Code, alluding to this process.

Discuss this Konstantin Kinchev biography with the community: