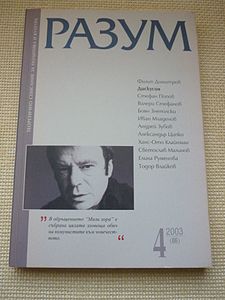 Who was Konstantin Pavlov?

Konstantin Pavlov was a Bulgarian screenwriter, author and poet. Pavlov became a prominent intellectual during Burlgaria's Communist era, even though he faced censorship and a ten-year-long publishing ban by the government.

Pavlov was born on April 2, 1933, in the former village of Vitoshko, near the capital Sofia. He was among the few Bulgarian authors and intellectuals who dared to act autonomously and defy the Bulgarian Communist government, which ruled the country from 1945 until 1989. Government censors began a ten-year-long publishing ban against his work beginning in 1966. Bulgarians began illegally publishing and reading Pavlov's poems during the censorship against his work.

Pavlov received numerous awards in literature and poetry. He was "granted" the Grand Prix at the Karlovy Vary International Film Festival in 1980 for his screenplay of the film, Illusion. His works were translated in numerous European languages.

Konstantin Pavlov died in Sofia, on September 28, 2008, at the age of 75. He was survived by his wife, Maria, and their daughter, Donka. His death was announced by the Union of Bulgarian Film Makers.

Discuss this Konstantin Pavlov biography with the community: