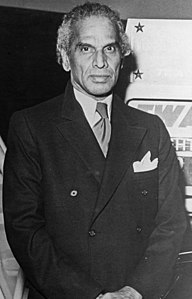 Who was V. K. Krishna Menon?

Vengalil Krishnan Krishna Menon was an Indian nationalist, diplomat and statesman, described as the second most powerful man in India by Time magazine and others, after his ally and intimate friend, Jawaharlal Nehru.

Noted for his eloquence, brilliance, and forceful, highly abrasive persona, Menon inspired widespread adulation and fervent detraction in both India and the West; to his supporters, he was an unapologetic champion of India in the face of Western imperialism, who famously “taught the white man his place”; to his Western detractors, “Nehru’s evil genius”. US President Dwight Eisenhower characterised him as “menace governed by an ambition to prove himself the master international manipulator and politician of the age”, while Indian President K.R. Narayanan eulogised him as a truly great man; decades after his death, Menon remains an enigmatic and controversial figure.

Characterised as "vitriolic, intolerant, impatient, and exigent – yes, but generous, sensitive, considerate, a great teacher too, and a great man" by Lord Listowell, the last British secretary of state for India, Menon cut an influential figure on the world scene. As a young man, Menon served as co-founding editor of Penguin Books, and led the overseas wing of the Indian independence movement, launching the India League in London, aggressively campaigning within the United Kingdom to win public support for Indian independence, and rallying the support of such superpowers as the Soviet Union. In the immediate wake of independence, Menon emerged as engineer of and spokesman for India’s foreign policy, and, more generally, architect of the non-aligned movement; he headed India’s diplomatic missions to the United Kingdom and the United Nations, and distinguished himself in diplomatic matters varying from the Kashmir issue to the Suez crisis.

Discuss this V. K. Krishna Menon biography with the community: