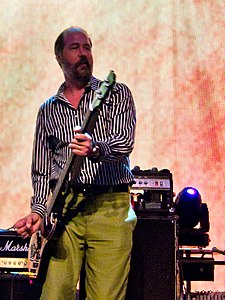 Who is Krist Novoselic?

Krist Anthony Novoselic II is an American rock musician, best known for being the bassist and co-founder of the grunge band Nirvana. After Nirvana ended, Novoselic formed Sweet 75 and then Eyes Adrift, releasing one album with each band. From 2006 to 2009 he played in the punk band Flipper, with which he played on the studio album Love and the live album Fight, and in 2011 contributed bass and accordion to the song "I Should Have Known", from the Foo Fighters' studio album Wasting Light.

Apart from his musical endeavors, Novoselic has been active politically, including the creation of the political action committee JAMPAC. From November 2007 until September 2010, Novoselic wrote a weekly column on music and politics for Seattle Weekly's website. Since 2008 he has been board chair of the electoral reform organization FairVote.

Discuss this Krist Novoselic biography with the community: