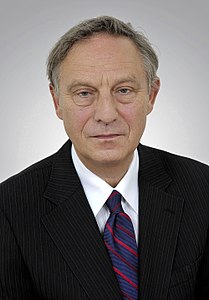 Krzysztof Marek Piesiewicz is a Polish lawyer, screenwriter, and politician, who is currently a member of the Polish Parliament and head of the Ruch Społeczny or Social Movement Party.

Piesiewicz studied law at Warsaw University and began practicing in 1973. Through the late 1970s he became increasingly involved in political cases, defending opponents of the Communist regime, serving as a legal advisor for Solidarity, and assisting in the successful prosecution of the murderers of Jerzy Popiełuszko.

In 1982 he met the film director Krzysztof Kieślowski, who was planning to direct a documentary on political show trials in Poland under martial law. Piesiewicz agreed to help, though he doubted whether an accurate film could be made within the constraints of the judicial system; indeed, the filmmakers found that their presence in court seemed to be affecting the outcomes of cases, often improving the prospects of the accused, but making it hard to capture judicial abuses.

Kieślowski decided to explore the issue through fiction instead, and the two collaborated for the first time as writers on the feature film No End, released in 1984.

Discuss this Krzysztof Piesiewicz biography with the community: