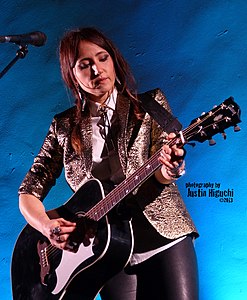 Who is KT Tunstall?

Kate Victoria "KT" Tunstall is a Scottish singer-songwriter and guitarist. She broke into the public eye with a 2004 live solo performance of her song "Black Horse and the Cherry Tree" on Later... with Jools Holland. She has enjoyed commercial and critical success since, picking up three nominations before winning a BRIT Award, and a Grammy Award nomination. She is also the recipient of an Ivor Novello Award.

She has released five albums internationally: Eye to the Telescope, KT Tunstall's Acoustic Extravaganza, Drastic Fantastic, Tiger Suit and Invisible Empire // Crescent Moon. She has also appeared in an episode of the comedy series This is Jinsy on Sky Atlantic.

Tunstall has a contralto vocal range.

Discuss this KT Tunstall biography with the community: