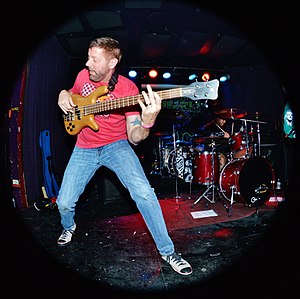 Who is Kyle Sokol?

Kyle Sokol is an American bassist and skateboarder.

Kyle Sokol is known for his style of bass playing that mostly consists of fast technical bass lines and has played in bands such as Trust for Liars, Rude Squad, Noble Jones, Philistines, Basmistist, Stretch, Leadfoot, Cadaveric Mass, The Lazarus Machine, Strict-9, Must Not Kill, and even the controversial Tampa industrial metal band Hell on Earth. He also did a metal project with vocalist Bryan Cegon from James Murphy's band Disincarnate, Roadrunner Records from 2001-2003. His most recent band is Trust for Liars which includes former members of the well known Tampa Bay area based bands Trace of Day and Not Tonight Josephine. Kyle Sokol was also chosen for the touring bass position with Pure Steel Records recording artist Seasons Of The Wolf. Dates for the tour are yet to be announced, but they will consist of several metal music festivals throughout Europe. As of August 2012, Kyle Sokol has been endorsed by Warwick amplifiers, cabinets, and basses and has a Warwick Streamer LX Custom as his main instrument.

His playing is very jazz-oriented and he has provided a lot of new ideas for metal bass lines in the metal scene of Tampa, Florida. He also contributed to the long running Rivot Rag Tampa Bay metal music magazine / publication with a bass guitar column entitled "The Low End" for several years. He is one of the few bass players in metal that uses extensively the slap & pop playing technique, along with two-handed tapping. He was chosen by Kelly Shaefer of the Band Atheist to play while Kelly was in Neurotica and about to tour on Ozzfest. The reunion of Atheist never came to fruition for a myriad of reasons at that time. Kyle Sokol currently tours the South East with several bands. He teaches lessons privately and works as a session player in the Tampa, Florida area. Kyle Sokol has worked with, played with, and or recorded with artists such as Victor Wooten, Anthony Wellington, Steve Bailey, Chuck Rainey, Peter Frampton, Edgar Meyer, Stu Hamm, Howard Levy, Joseph Wooten, Future Man, Richard Bona, JD Blair, Anthony Jackson, 311, Matisyahu, Rancid, Pietasters, Dan Potthast, Everclear, and Avail to name a few. He has served as a part-time staff member with Victor Wooten at his Wooten Bass/Nature Camp in Nashville, Tennessee.

Discuss this Kyle Sokol biography with the community: