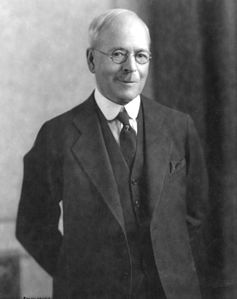 Louis Denison Taylor was elected the 14th mayor of Vancouver, British Columbia. He was elected seven times between 1910 and 1934, serving a total of 11 years.

Born in Michigan, Taylor lived in Chicago before coming to Vancouver on 8 September 1896, probably running away after defrauding an employer. He briefly participated in the Klondike Gold Rush before beginning his political career.

L. D. Taylor championed the issue of amalgamating South Vancouver and Point Grey with Vancouver, and oversaw a variety of public works projects in the rapidly developing city, including the opening of the airport at Sea Island and the Burrard Street Bridge. Amalgamation would take place in 1929 but not under Taylor, because he lost the 1928 election to W. H. Malkin.

Taylor ran as a friend of organized labour, although he opposed labour militancy and Communists, who had become quite active in the 1930s in Vancouver, notably for their agitation amongst the unemployed.

Mayor Taylor's political career immeasurably benefited from his other role as a newspaperman. He began in the trade working for the Vancouver Daily Province before buying the Vancouver World. The building he had constructed for his newspaper was later taken over by the Vancouver Sun and remains a landmark building in the city, known today as the Sun Tower. Taylor eventually was forced to sell the paper, but not before using it as a political platform from which he railed against Chinese immigration, big business, and other issues of the day that helped establish his reputation as a populist leader.

Discuss this L. D. Taylor biography with the community: