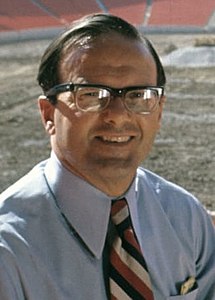 Who was Lamar Hunt?

Lamar Hunt was an American sportsman and promoter of American football, soccer, basketball, tennis and ice hockey in the United States and an inductee into three sports' halls of fame. He was the principal founder of the American Football League and Major League Soccer, as well as MLS predecessor the North American Soccer League. Hunt co-founded the World Championship Tennis and was also the founder and owner of the National Football League's Kansas City Chiefs, the Kansas City Wizards and at his death owned two MLS teams, Columbus Crew and FC Dallas. The oldest ongoing national soccer tournament in the U.S., the U.S. Open Cup now bears his name in honor of his pioneering role in that sport stateside. In Kansas City, Hunt also helped establish the Worlds of Fun and Oceans of Fun theme parks. He was inducted into the Pro Football Hall of Fame in 1972; into the National Soccer Hall of Fame in 1982; and into the International Tennis Hall of Fame in 1993. The National Soccer Hall of Fame bestowed upon Hunt their Medal of Honor in 1999, an award given to only three recipients in history thus far. He was married for 42 years to his second wife Norma, and had four children, Sharron, Lamar Jr., Daniel, and Clark Hunt.

Discuss this Lamar Hunt biography with the community: