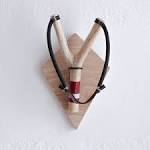 Who was Lance Pierre?

Lancelot Richard Pierre was a West Indian cricketer who played in one Test in 1948.

Pierre was a fast bowler who played for Trinidad from 1940-41 to 1949-50. He played the Third Test in Georgetown in 1947-48 against England, which West Indies won, though Pierre did not bat or take a wicket. He toured England in 1950, taking his best first-class figures of 8 for 51 against Lancashire.

Discuss this Lance Pierre biography with the community: