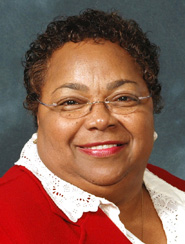 Larcenia J. Bullard was an American politician and a Democratic member of the Florida State Senate, representing the 39th District, which included parts of Collier, Hendry, Miami-Dade, Monroe, and Palm Beach Counties, from 2002 to 2012.

Bullard was born in Allendale, South Carolina, and moved to Florida in 1980. In 1992, she was elected to the Florida House of Representatives from the 118th District, defeating Republican candidate John Minchew. She was re-elected without opposition in 1994, and in 1996, defeated Bill Greene. Bullard sought a final term in the House in 1998, and defeated Republican James Jones and independent Denny Wood. She did not seek another term in 2000, and was succeeded by her husband, Edward B. Bullard.

Discuss this Larcenia Bullard biography with the community: