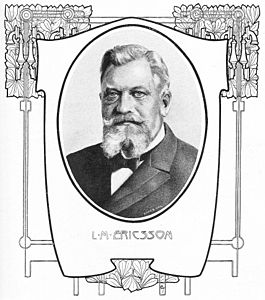 Who was Lars Magnus Ericsson?

Lars Magnus was born in Värmskog, Värmland, and grew up in the small village of Vegerbol located between Karlstad and Arvika. At the age of 12, Ericsson's father died, forcing him to seek work as a miner. He worked until he had money enough to leave the village and move to Stockholm in 1867. He then worked for six years for an instrument maker named Öllers & Co. who mainly created telegraph equipment. Because of his skills, he was given two state scholarships to study instrument making abroad between 1872 and 1875. One of the companies he worked at was Siemens & Halske.

Upon his return to Sweden in 1876, he founded a small mechanical workshop together with his friend Carl Johan Andersson who had also worked at Öllers & Co.. This workshop was actually a former kitchen of some 13 m² situated at Drottninggatan 15 in the most central part of Stockholm. Here, he started a telephone company by analyzing Bell company and Siemens telephones and creating his own copies in their image. It was not until they started cooperating with Henrik Tore Cedergren in 1883 that the company would start to grow into the Ericsson corporation.

Discuss this Lars Magnus Ericsson biography with the community: