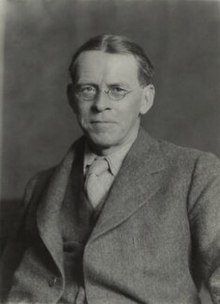 Who was Lascelles Abercrombie?

Lascelles Abercrombie was a British poet and literary critic, one of the "Dymock poets". He was born in Ashton upon Mersey and educated at Malvern College, and at the University of Manchester.

Before the First World War, he lived for a time at Dymock in Gloucestershire, part of a community that included Rupert Brooke and Robert Frost. Edward Thomas also visited. In 1922 he was appointed Professor of English at the University of Leeds in preference to J. R. R. Tolkien, with whom he shared, as author of The Epic, a professional interest in heroic poetry. In 1929 he moved on to the University of London, and in 1935 to a prestigious readership at Oxford University. He wrote a series of works on the nature of poetry, including The Idea of Great Poetry and Romanticism. Abercrombie repeated in volume after volume the same view of the nature of poetry -- that it is the representation of the poet's own imaginative experience, conveyed by literary technique to the reader, in whom the same experience is then replicated. The lack of a discussion of such topics in English universities at the time meant that the limitations in this view were not pointed out, and Abercrombie lacked the stimulus of a critical response that would have helped him to amend and develop his theory. His critical studies of Hardy and Wordsworth belonged to a much more familiar genre, and were remembered longer.

Discuss this Lascelles Abercrombie biography with the community: