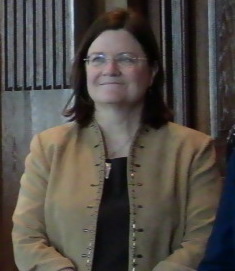 Who is Laura Denvir Stith?

Laura Denvir Stith has been a judge on the Supreme Court of Missouri since 2001. She was elected by her fellow Supreme Court justices to serve a two-year term as Chief Justice, from July 1, 2007, to June 30, 2009, becoming the second woman to serve as Missouri's highest-ranking jurist.

Stith is a founding director for Lawyers Encouraging Academic Performance in Kansas City, where she lives with her attorney husband, Donald Scott, and their three children. Her late father, Richard T. Stith, Jr., an insurance agent and financial planner, served as mayor of Clayton, Missouri, a suburb of St. Louis, from 1983 to 1987. He was a decorated Marine pilot during World War II.

Discuss this Laura Denvir Stith biography with the community: