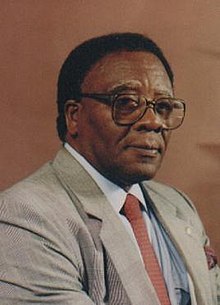 Who was Hamilton Lavity Stoutt?

Hamilton Lavity Stoutt was the first and longest serving Chief Minister of the British Virgin Islands, winning five general elections and serving three non-consecutive terms of office from 1967 to 1971, again from 1981 to 1983 and again from 1986 until his death in 1995. He also served as a parliamentarian in the legislative council prior to the adoption of the 1967 constitution. He was the leader of the United Party.

Since Stoutt's death in 1995, a public holiday has been declared annually in his memory on his birthday, 7 March.

During his lifetime, Lavity Stoutt was extremely fond of the quote from Proverbs 29:18 - "Where there is no vision, the people perish", a phrase he would recite frequently when arguing in favour of development projects.

Discuss this Hamilton Lavity Stoutt biography with the community: