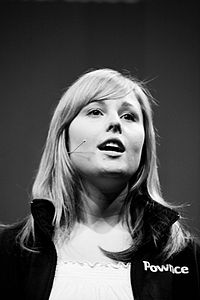 Who is Leah Culver?

Leah Culver is a programmer.

Culver is a 2006 computer science graduate of the University of Minnesota. In 2007, she co-founded the micro-blogging site Pownce, acquired by Six Apart in December 2008. She left Six Apart in February 2010. She co-founded Convore, focused on real time chat in 2011. In 2012, Convore added a new product, Grove.io which focuses on hosted real-time chat for companies and announced that Convore service will be discontinued on April 1, 2012. On September 15, Grove.io announced that it will cease service on October 13, 2012. Shortly thereafter on September 28, 2012, Revolution Systems announced that they had acquired Grove.io and would be continuing its operations.

Culver was named among the Most Influential Women in Web 2.0 by Fast Company Magazine in November 2008.

Discuss this Leah Culver biography with the community: