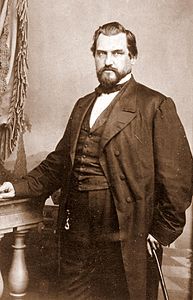 Who was Leland Stanford?

Amasa Leland Stanford was an American tycoon, industrialist, politician and founder of Stanford University. Migrating to California from New York at the time of the Gold Rush, he became a successful merchant and wholesaler, and continued to build his business empire. He served one two-year term as governor of California after his election in 1861, and later eight years as senator from the state. As president of Southern Pacific and, beginning in 1861, Central Pacific, he had tremendous power in the region and a lasting impact on California. Many considered him a robber baron.

Discuss this Leland Stanford biography with the community: