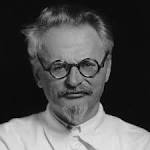 Who was Leon Trotsky?

Leon Trotsky was a Russian Marxist revolutionary and theorist, Soviet politician, and the founder and first leader of the Red Army.

Trotsky was initially a supporter of the Menshevik Internationalists faction of the Russian Social Democratic Labour Party. He joined the Bolsheviks immediately prior to the 1917 October Revolution, and eventually became a leader within the Party. During the early days of the Soviet Union, he served first as People's Commissar for Foreign Affairs and later as the founder and commander of the Red Army as People's Commissar of Military and Naval Affairs. He was a major figure in the Bolshevik victory in the Russian Civil War. He was also among the first members of the Politburo.

After leading a failed struggle of the Left Opposition against the policies and rise of Joseph Stalin in the 1920s and the increasing role of bureaucracy in the Soviet Union, Trotsky was successively removed from power in 1927, expelled from the Communist Party, and finally deported from the Soviet Union in 1929. As the head of the Fourth International, Trotsky continued in exile in Mexico to oppose the Stalinist bureaucracy in the Soviet Union. An early advocate of Red Army intervention against European fascism, in the late 1930s, Trotsky opposed Stalin's non-aggression pact with Adolf Hitler. He was assassinated on Stalin's orders in Mexico, by Ramón Mercader, a Spanish-born Soviet agent in August 1940.

Discuss this Leon Trotsky biography with the community: