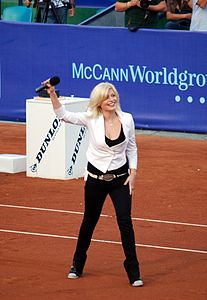 Who is Loredana Groza?

Loredana Groza is a Romanian pop singer-songwriter, model, actress, dancer, TV personality, media proprietor, and coach in the talent show Vocea României known for alternating music styles. She began her career in Onești, Romania. She is married to Andrei Boncea and they have one daughter.

Her debut album Bună seara, iubito, which was released in 1988, and the title song remains her biggest hit to this day.

In 2002, inspired by the huge success of her album Agurida, Loredana decided to go further in rediscovering and reinterpriting some old Romanian songs after meticulous research on the period between the two world wars. The result was the live performance Zaraza–vânzătoarea de plăceri on Pro TV which was released in December 2002 on MC, CD and VHS support.

Her song "Vreau toată noaptea" was falsely rumoured to be taking part in the Romanian National Final for the Eurovision Song Contest 2006. This contradicted Loredana's comments that she would never take part in the national selection following her defeat in 2005 with the song "Lele". The rumour was, however, quashed following the publication of the participants in the 2006 National Final.

She is coaching in the Romanian version of the televised competition The Voice and she is the image of Avon in Romania.

Discuss this Loredana Groza biography with the community: