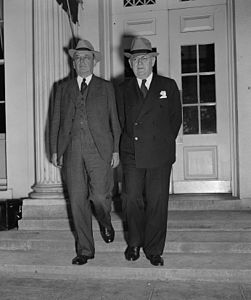 Who was Louis Brownlow?

Louis Brownlow was an American author, political scientist, and consultant in the area of public administration. As chairman of the Committee on Administrative Management in 1937, he co-authored a report which led to passage of the Reorganization Act of 1939 and the creation of the Executive Office of the President. While chairing the Committee on Administrative Management, Brownlow called several of President Franklin D. Roosevelt's advisors men with "a passion for anonymity"—which later became a popular phrase.

Discuss this Louis Brownlow biography with the community: