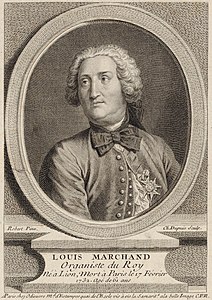 Who was Louis Marchand?

Louis Marchand was a French Baroque organist, harpsichordist, and composer. Born into an organist's family, Marchand was a child prodigy and quickly established himself as one of the best known French virtuosi of his time. He worked as organist of numerous churches and, for a few years, at the French court. Marchand had a violent temperament and an arrogant personality, and his life was filled with scandals, publicized and widely discussed both during his lifetime and after his death. Despite his fame, few of his works survive to this day, and those that do almost all date from his early years. Nevertheless, a few pieces of his, such as the organ pieces Grand dialogue in C and Fond d'orgue in E minor, have been lauded as classic works of the French organ school.

Discuss this Louis Marchand biography with the community: