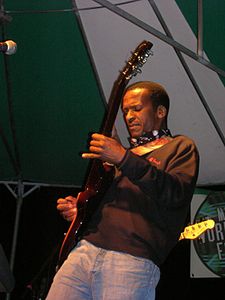 Who is Louis Mhlanga?

Louis Mhlanga is a South African based Zimbabwean award-winning guitarist and producer. Mhlanga taught himself playing the guitar at a tender age and is considered one of the best Southern African guitarists.

Discuss this Louis Mhlanga biography with the community: