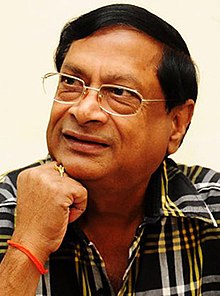 M. S. Narayana is an Indian actor, comedian and director who primarily works in Telugu Cinema. He has acted in more than 500 films and is noted for his comic timing and facial expressions with witty dialogues. He is well known for his acting in films such as Indra, Sontam, Dookudu. He also penned dialogues for 8 films like Alexander starring Suman. He won the Andhra Pradesh State Nandi Award for Best Male Comedian five times,in 1997,1999,2000,2003 and 2011 for the films 'Maa Nanna ki Pelli','Ramsakkanodu','Sardukupodam Randi','Shivamani' and 'Dookudu'.

Discuss this M. S. Narayana biography with the community: